Reinforced concrete frame structures with masonry infill represent a large proportion of the building stock in earthquake-prone regions worldwide. The infills are used both as an external building closure and for the subdivision inside the building. As non-load-bearing components, infill panels allow flexible use of the floor plan over the lifetime of the building in accordance with modern architectural requirements. In addition, masonry infill panels offer very good properties in terms of sound insulation, fire protection and thermal insulation. However, the combination of reinforced concrete frames with high deformation capabilities and, in comparison, very stiff masonry infills requires careful planning and execution of the masonry infill. Traditionally, the infills are bricked into the frame completely without any gaps, so that there is interaction between the frame and the infill. This leads to local damage at the wall level and can result in significant changes in the dynamic behaviour of the entire building by activating the infill. This can also lead to unfavourable torsional effects which can initiate a building failure.

In addition, the infills are loaded by inertial forces perpendicular to the plane, so that the connection of the infills to the surrounding frame is of great importance. The connection must be designed in such a way that the forces perpendicular to the wall are safely dissipated even in the event of larger frame deformations occurring at wall level. This combined loading of infill walls in and perpendicular to the wall plane has not been taken into account in practice up to now, since the current earthquake standards consider and verify the loads separately. Also, pre-damages of the connections to the frame due to the cyclical nature of the seismic actions and the alternating stresses in and perpendicular to the plane are not considered. In the event of an earthquake, this leads to major damage to buildings with failure of entire infill areas. Figure 1 shows an example of the damage to infill walls of buildings caused by the earthquakes in Emilia Romagna (2012). 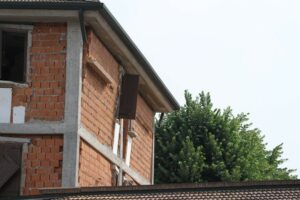 The behaviour of masonry infill under seismic loads has been the subject of intensive research for decades, e.g. [2], [3], [4], [5], [6]. The large number of research projects and the recurring earthquake damage illustrate the difficulty of designing traditional masonry infill panels with full contact to the frame to be earthquake resistant. Therefore, different solution strategies for increasing the earthquake resistance of infill masonry have been developed, which can be assigned to the three approaches shown in Figure 2. The first approach (Figure 2a) provides for a reinforcement of the infill and its non-positive connection to the reinforced concrete frame. The second approach improves the deformability of the infill by the arrangement of additional sliding planes (Figure 2b). The third approach is a decoupling of infill and frame, so that the frame deformations are not imposed on the infill (Figure 2c).

Figure 2: Approaches to improve the seismic behaviour of masonry infill

Within the framework of the doctoral thesis financed by the DAAD, the behaviour of traditionally infilled reinforced concrete frames with openings under loads in and perpendicular to the plane of the frame is first examined in detail. In the next step, a decoupling system will be developed which allows a safe execution of infill reinforced concrete frames in earthquake areas with and without openings. The developments are based on small component tests, cyclic shear wall tests and numerical simulations. The planned test program is summarized in Table 1. The effectiveness of the decoupling system will be demonstrated by comparing test and simulation results on traditionally filled and decoupled reinforced concrete frames. 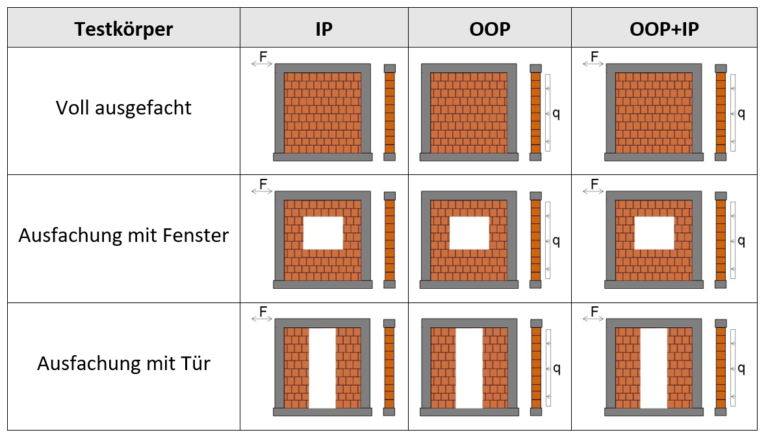